Fourteen years ago, I decided to go to London during Christmas time after watching Love...Actually with my bff. So we booked flights and accomodation for the next year and there we went. Since then, it became kind of a tradition. We went every year, apart from those years, in which we had babies. Then I got sick and going to a crowded city before Christmas seemed like a real nightmare. So we didn't go since 2010.

I remember one afternoon about five years ago, when I was very, very sick and crying my eyes out. I talked to my mom about the good old times and how I would never ever see London at Christmas again. "You will!" she ensured me and she was so right. 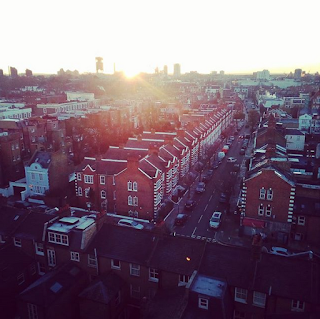 It felt good to go this year, so we book flights and a room back in April. We somehow didn't manage another date, so we flew out to the UK two weeks before Christmas. We are idiots, really. London is always busy, 365 days a year, but two weeks before Christmas? It's hell. It's so busy that tube stations on Oxford Street are closed. Too many people down there. Plus, what did we think about flying in Mid-December?? Nothing, really. We didn't think about loads of snow and how the planes wouldn't be able to fly. We still thought we were fine, when we woke up to fluffy snowflakes on Sunday morning. Hell broke lose, when our flight was cancelled. Big shit. Long story short: it took us 29hrs of delay to come back to Germany, involving a fire alarm and an evacuated London City Airport. Fun all around.

Honestly, when I open my front door on late Monday night, it felt so incredibly good to be home. I never felt that way before. I am pretty fed up with travelling for the moment (I am not a big traveller anyway), but ask me again in some weeks or months.

Apart from all that, we had a great time, did some serious shopping and I even brought home a traditional British Christmas Cake. (In fact, I am the only one around who is excited about that.) We also saw Kinky Boots, which was great and Thriller Live (the Michael Jackson show), which was good, too.

Now, we are heading into the last full weekend before Christmas and there are tons to do. So, have a great weekend, everybody and remember to also find time for a nice hot chocolate and a Christmas book or movie.